Back at CES in January, among all the fun and interesting new projects we investigated, one gadget stood out among the rest. That gadget was Urb-E.

And today, almost a month later, the Urb-E scooter is live on Indiegogo. As part of the campaign, the company is launching two separate models to consumers.

The first is the Urb-E commuter, which has three wheels instead of two, making for a more reliable and smooth ride. The Urb-E GP, on the other hand, only has two wheels and can thus make sharper turns, though both models have the same speed and power specifications.

The Urb-E folds up to the size of a rollerboard suitcase for easy handling, and weighs just under 30 pounds making it an easy last-leg vehicle for urban commuters.

Topping out at 15mph, the Urb-E can last up to 20 miles on a single charge. And to top it all off, the Urb-E is easily customizable thanks to inserts that fit within the frame, giving the Urb-E a nice accent color alongside the metal.

Plus, Urb-E comes with a compartment to charge your phone and check in on the charge of your Urb-E through a dedicated Urb-E app.

Check out their Indiegogo Campaign here.

Media that YOU own

It’s no secret that much of mainstream media no longer serves us. The old bastions of journalism not only fail to cover the issues that matter, but they’re steadily going out of business.

Many of us spend tens or hundreds of dollars a month on newspaper and cable subscriptions. What if some of those funds went to support a different model of journalism?

Many of you have spent time at The Common Sense Canadian in the three years since Rafe Mair and I co-founded it – so you have a sense of what we’re capable of. What you may not be aware of is how much we’ve managed to do with so little.

Your support will go a long way!

We already reach a hundred thousand people, primarily in Western Canada – but we want to be speaking to a half million, across the country and beyond. That’s where you come in.

We’ve been working hard for the past year at taking The Common Sense Canadian to the next level. By investing in this campaign, you will help fund:

For more information on this Indiegogo Campaign, click here: The Common Sense Canadian

When an international fishing fleet finds its way to the last untouched ocean on Earth – the Ross Sea in Antarctica – humanity is faced with a great challenge: do we fish the last ocean or do we protect it?

For the past seven years New Zealand filmmaker Peter Young has been part of a team working on a campaign to protect the Ross Sea, widely regarded as the most pristine marine ecosystem on Earth. A key tool in that campaign is his self-funded feature documentary The Last Ocean. Peter is taking the film on a road trip in the US, and then onto Europe, where he hopes to inspire audiences to support full protection of the Ross Sea.

The next few weeks are crucial. In July of this year, 25 Antarctic nations will gather in Bremerhaven, Germany, to decide whether or not to establish a large marine protected area in the Ross Sea. The lead up to Bremerhaven is our big opportunity to make a difference.

Speaking at a special screening of the The Last Ocean in Washington DC last month, US Secretary of State, John Kerry said he hoped that the film would inspire people to be responsible stewards of “this fragile planet”.

Supporting this Last Ocean road trip is an opportunity to do just that.

Find out about the issue here: www.lastocean.org

Attention: This campaign has ended, but there are ways to contribute. To view, please click here: Saving the Last Ocean

BizeeBox: Taking the Waste Out of Takeout

Help Create a Less Wasteful Future: Take the Waste Out of Takeout!

What is a “reusable takeout container service,” you ask? Well, after you sign up for BizeeBox for free, it basically works like this:

To view this Indiegogo campaign, click here: Bizeebox: Taking the Waste Out of Takeout 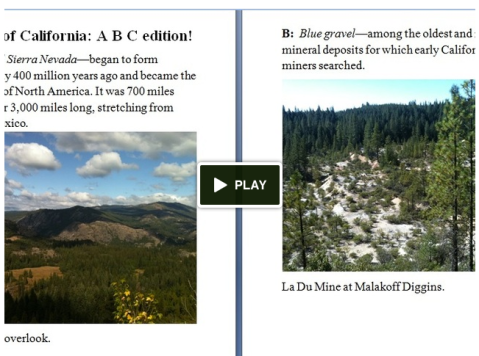 I am creating a kid-friendly book on the fascinating and dynamic geology of California. The book is geared toward K-8.

Why Geology For Kids?

For the entirety of my teenage son’s school career, he has been taught at home. We are not “traditional” home-schoolers in the sense you might believe. He has always been enrolled in a California independent study charter school. I have had the chance to be active in his choice of study and curriculum material. We gravitated toward independent study to foster his love of learning.

However, early on, I realized a gap in understanding the diverse geology of our state for young kids– especially for kids in home study programs. California has fascinating geology. I wanted to bring some of this interest to younger kids in a friendly, concise manner that could easily be used at home or in a classroom.

Teach Your Kids 7 Languages Through Fables

This project successfully raised its funding goal 6 days ago.

My name is Maya. I’m 12 years old. And I would like to help your kids get a headstart for the future! Relive the classics and learn 7 foreign languages at the same time. With the help of my parents, I will adapt 3 fables and make them easier to understand for kids. Each fable will have a different linguistic focus. Together the collection of fables will cover quite a few concepts and expressions in the target languages.

Everybody can learn a language

Our goal is to make learning languages easy, fun and accessible to all. We will deliver each fable in two formats: as a free IPad

App and via the web. Not only will your contribution make it possible to buy the necessary software, accessories (like a digital pen for my drawings), and hire native speakers, but most important, it will allow us to create and release these fables for free in all 7 languages.

For more information on this Kickstarter Campaign, click here:

Teach Your Kids 7 Languages Through Fables

This Kickstarter Project successfully reached their goal of $1000

A fun and educational children’s book that promotes the importance of endangered animals and habitat conservation in Sarawak, Malaysia.

“A Crocodile Named Tom” is an educational children’s book that I wrote to help address awareness for an endangered species of crocodile called the Tomistoma (Tomistoma schlegelii).

The children’s book tells the story of Tom, a small Tomistoma crocodile, who becomes lost and has to find his way back home. On his journey home, he has to overcome many challenges, meet new friends, and learn important life lessons. The story is fun, engaging, and heartfelt and helps relate people to important issues regarding the conservation of endangered animals like the Tomistoma. The story also helps relate readers to the unique animals, environment, and people of Sarawak Malaysia.

For more information on this Kickstarter campaign, click here: 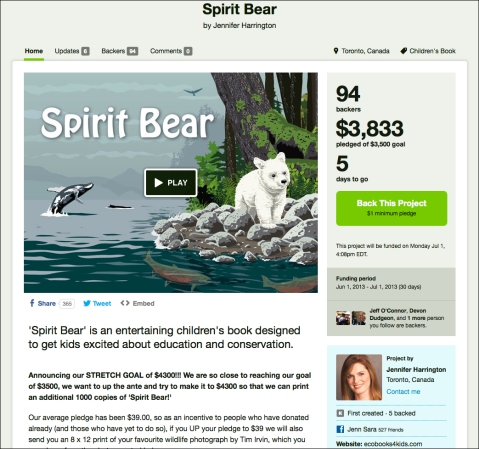 Our Kickstarter campaign is nearly complete! This is the FINAL week to pre-order a copy of ‘Spirit Bear’ tax and shipping free.

Visit www.ecobooks4kids.com/campaign and pre-order a copy of our animated ebook, our print version, or choose from a variety of wildlife prints from photographer Tim Irvin.

All proceeds from our campaign will go towards getting our first 2000 copies of ‘Spirit Bear’ printed. We are printing on 100% recycled paper with FSC covers and all printing will be done here in Canada.

Visit www.ecobooks4kids.com/campaign today to get a discounted copy of ‘Spirit Bear!’

The Tale of Imani the Bunny 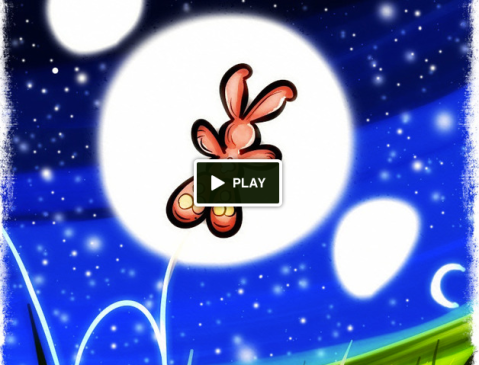 The Tale of Imani the Bunny by Tony Lamair Burks II  is the story of one rabbit’s journey to herself; it invites you to explore, learn, grow, and become. This Kickstarter Project successfully funded $3,505

Once upon a time there was a man
Who wrote a story for his god daughter
She loved the story and he promised to publish it one day
Although it’s been 16 years since he wrote the story
It’s never too late to honor a promise and realize a dream
It’s been a long journey to get this story published and, like Imani, I’ve learned many lessons along the way.

The Tale of Imani the Bunny

The Adventures of Barry the Bear 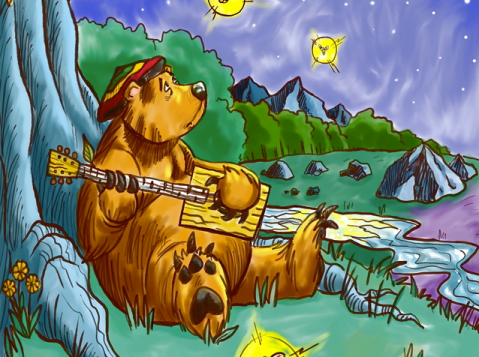 The Adventures of Barry the Bear by Nick Hutchinson

This Kickstarter Project was successfully funded $5,195 within 28 days

Barry the bear lives in his cave by the sea. Find out what happens when he discovers an old redwood log and learns how to surf. Barry the Bear lives in his comfortable cave by the sea. By day, he likes to go to the beach and watch the surfers ride the waves. He also likes to strum his guitar and exercise. One day Barry finds an old redwood log and decides to learn how to surf. Find out what happens when Barry meets the surfers and introduces them to his friends Walter the Weasel and Ollie the Owl.

The Adventures of Barry the Bear